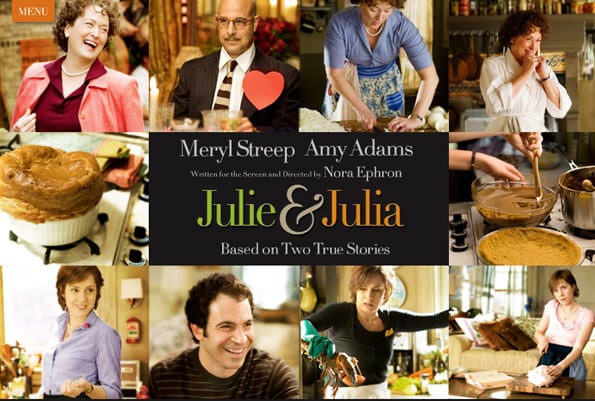 Finding inspiration… from a movie?

After months of having the Julie & Julia dvd sitting on my TV stand, I finally decided to watch it last weekend. My husband had seen it and said I would enjoy it since the movie is about a food blogger and that I would feel a connection to the movie.

So, did I? I’d have to say yes, I did feel a connection to Julie. Some of the emotions that Julie went through in the movie, wondering if anyone was reading her posts, if what she was doing mattered, are thoughts that have crossed my mind as well.  Our motivations are much different, however, as my end goal is to have a record of the dishes I make on a regular basis as well as give me a reason and excuse to try out new ideas.

What I didn’t expect, was to feel inspired to create new French influenced dishes (you’ll probably see them in the upcoming weeks). So far I’ve used way more butter than normal. I’m not sure that’s such a good thing, except that it tastes so so buttery.

At the end of the movie, my husband, son and I decided to find and watch the first episode of Julia Child’s TV show. Which to no surprise, was her Beef Bourguignon recipe.  After watching her make it, my son and husband were starved and both said “WE want you to make THAT!”.

So, this weekend, I’ll go look up that recipe from her book (yep, I have it of course) and follow the recipe as she wrote it.  Due to copyright reasons, I will not post the actual recipe on this website. However, I will give hints and suggestions.  And who knows, I might make my own version and post that.

I’m curious if anyone else was inspired to make something new after watching the movie. Inspiration comes from many sources, what’s your inspiration?

Here’s a couple links to purchase the DVD and Cookbook.

"Bacon is the candy of meat"

“I cook with wine, sometimes I even add it to the food.” ― W.C. Fields

No Replies to "Finding inspiration... from a movie?"