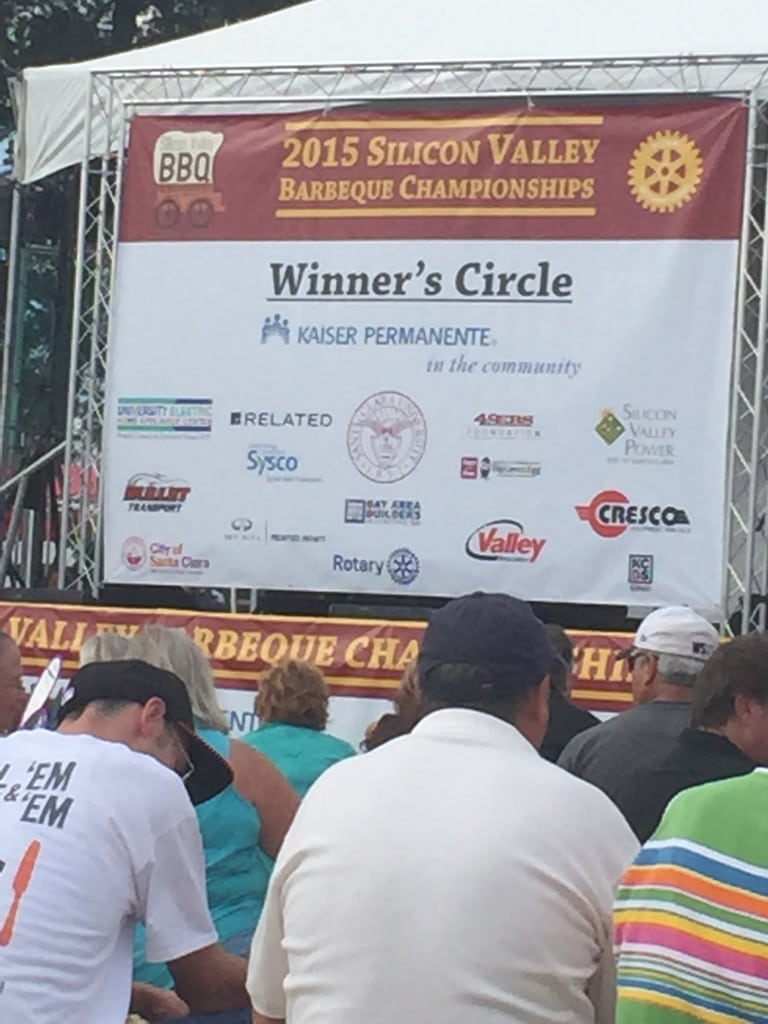 I had such a fun time at my 2nd competition at the Silicon Valley BBQ Competition. I hope I didn’t bombard you too much with all the Instagram and Facebook photos, but I thought it would be fun to document the day.

In order to get the full picture of the day, you need to know a bit about the days leading up to the competition. The hardest part really was getting a list of everything I wanted to bring and actually getting to the store for the items I was missing. I think I went to 5 different stores, some of them multiple times. So much for lists making it easier.

On the Friday before the competition, we had a little time complication since my son had a swim meet that day. So, we got our butts out of bed at 5:30a to get him ready, drove him to the competition, dropped him off, and then went and did some shopping and organizing. We went back to the competition at noon so we could help time and watch him swim the mile. Which, if you are wondering, he did great. His time was 20:32.86.

After the swim meet, I needed to sharpen my knives… 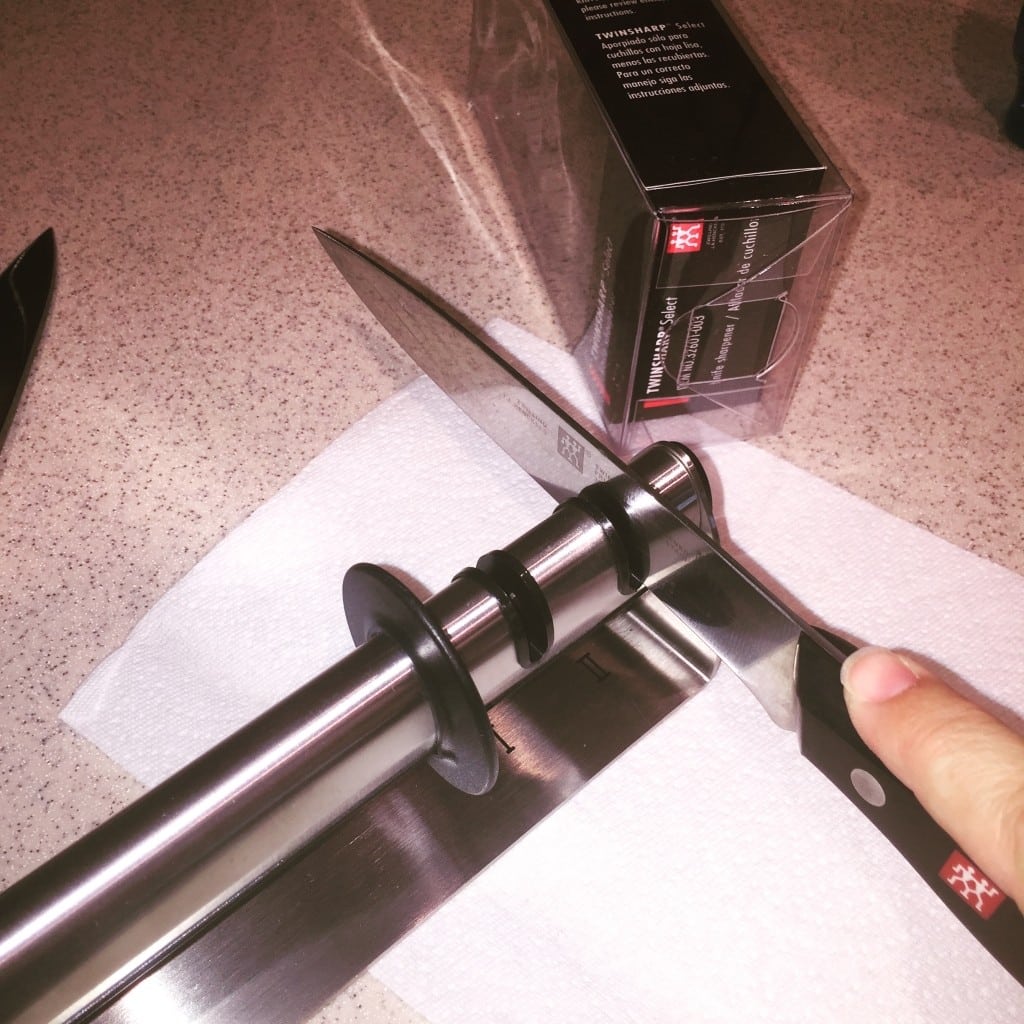 And then it was all about packing. We got everything packed into bins and then waited for it to cool off. Then with a borrowed truck from my brother-in-law and our SUV, we packed up everything that didn’t need refrigeration. The biggest issue we had was when we tried to put the smoker into the truck we borrowed. Uh oh, it didn’t fit! The truck had a bar that made it so the smoke stack of the smoker wouldn’t fit. A little trial and error and we figured out how to remove that bar so we could put the smoker in the truck.

But, then I had to lift that darn thing! I’m surprised, but we did it, just the two of us. Then we packed up what we could in the truck and SUV. 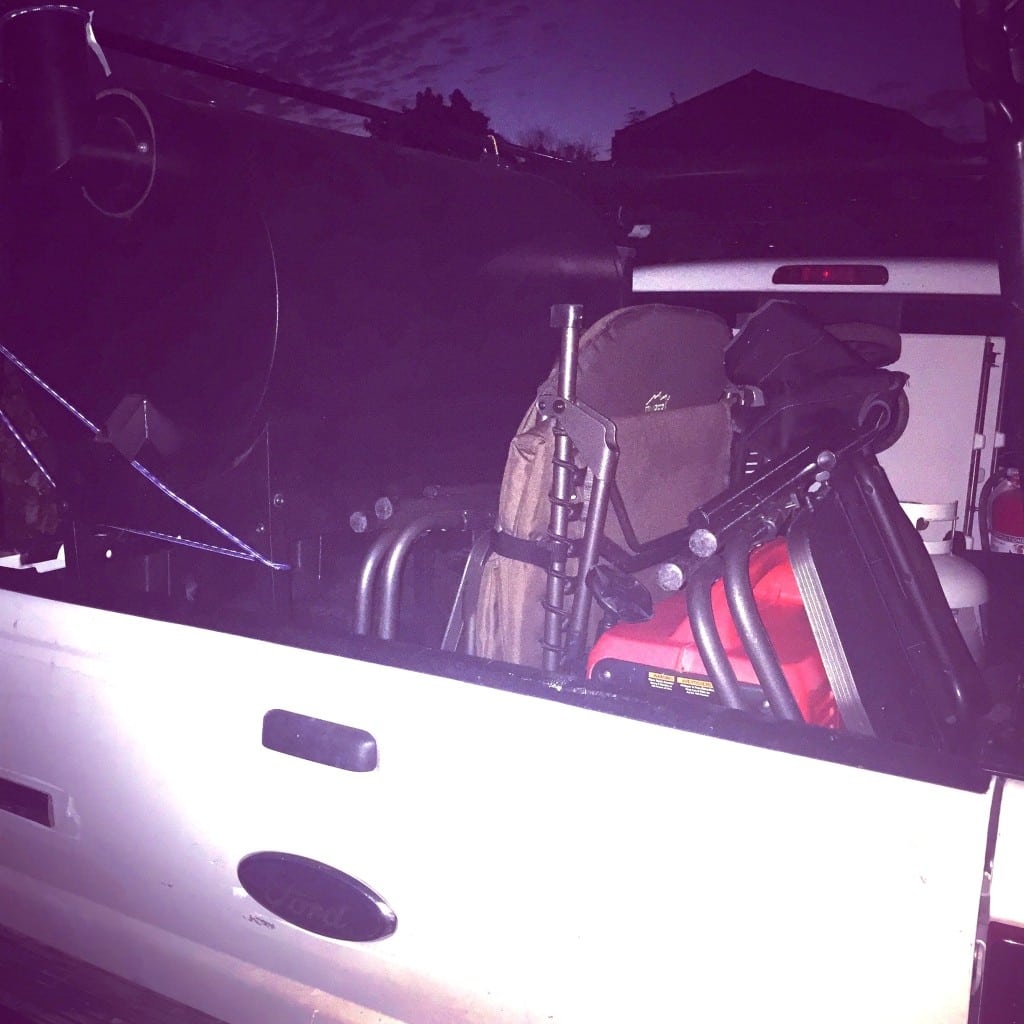 After a restless nights sleep, we were up and early again. This time we just needed to wait for a friend to pick up our son for the swim meet while we packed up the last of the refrigerated items. We had 4 coolers: 1 with just water and beer, another with just the meats, one with all the fresh herbs, and a fourth cooler with all the rest. Off to get some ice, and then we had to sit and wait in a line of cars to get into the event since they weren’t quite ready for us at 7:00am. 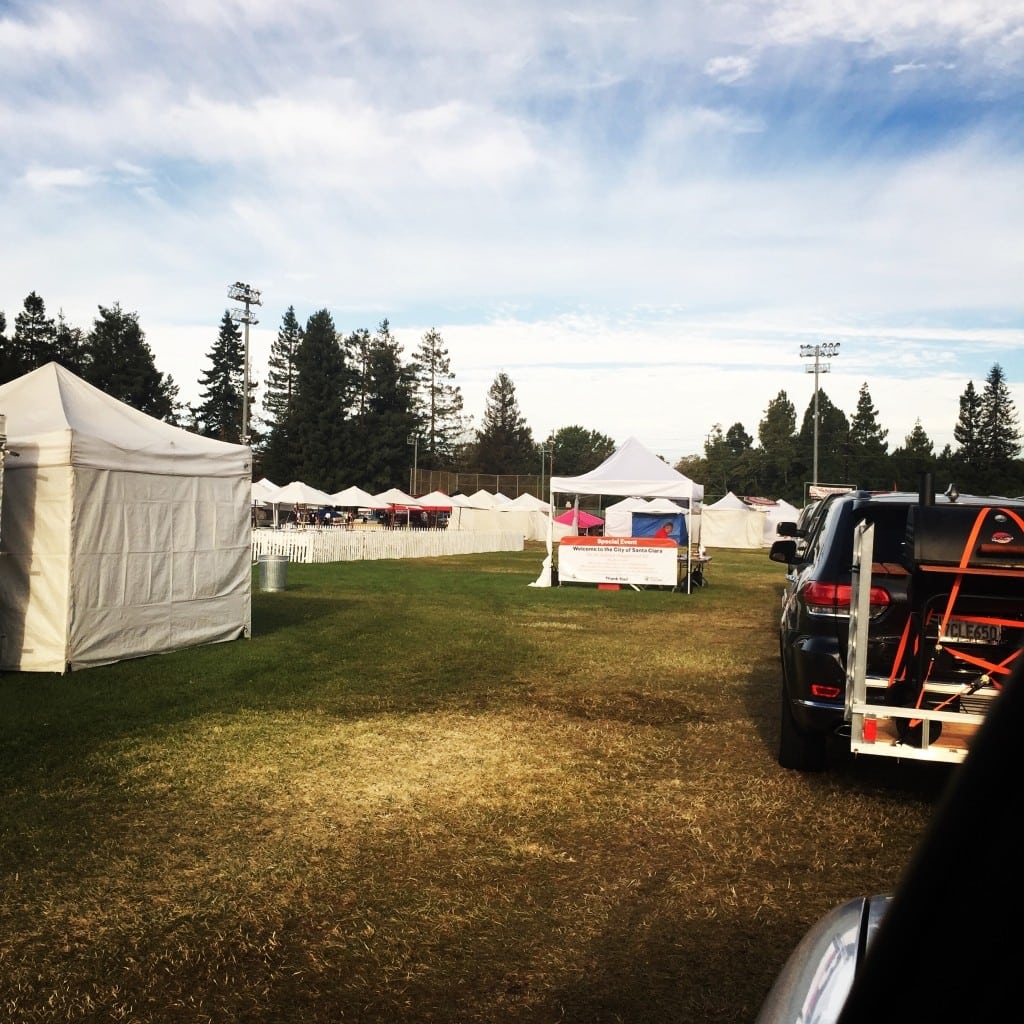 Then it was unpack the truck and setup. Here’s our setup. 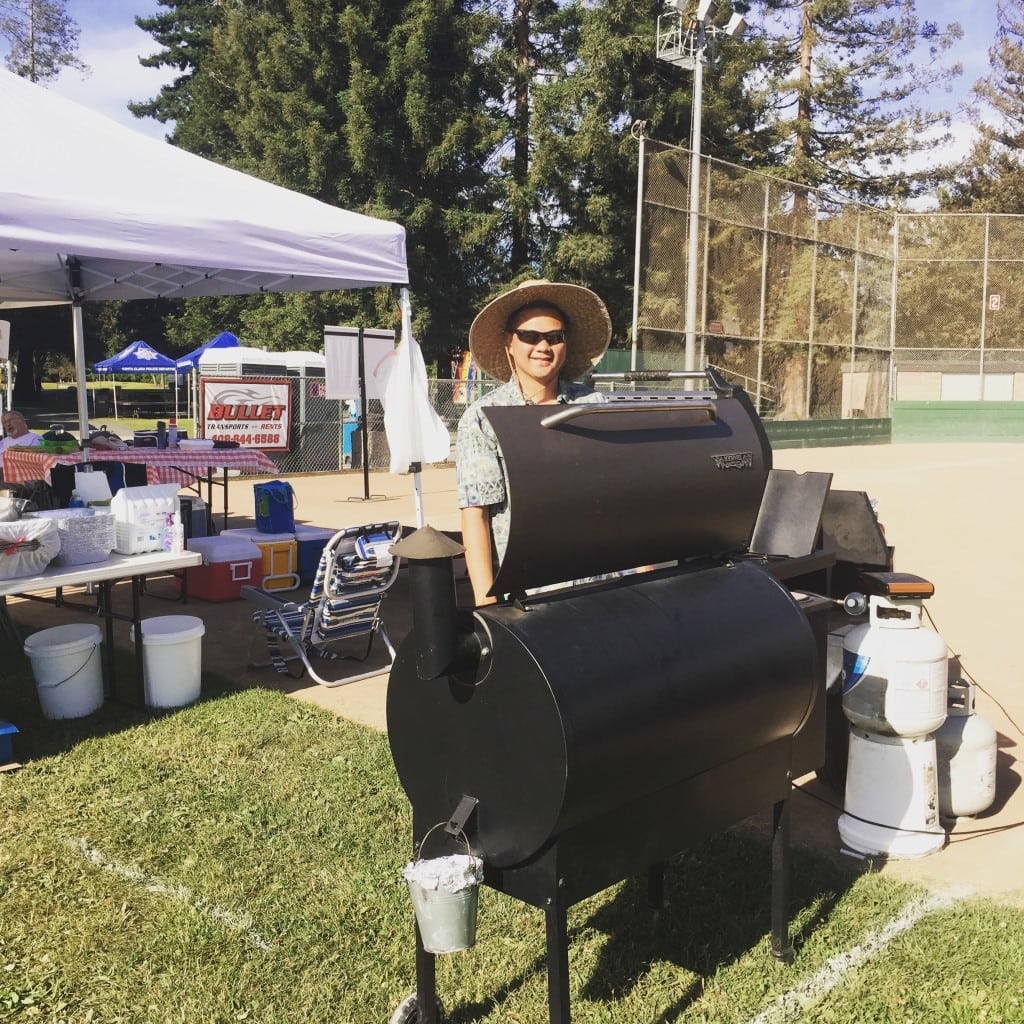 And the full setup

And yes, that is a cot in front. You would not believe how many people stopped and asked if we were selling them or where they could get one. Well, folks, we bought it at Costco a couple of years ago. They probably have it again this year, just look in the Camping section. 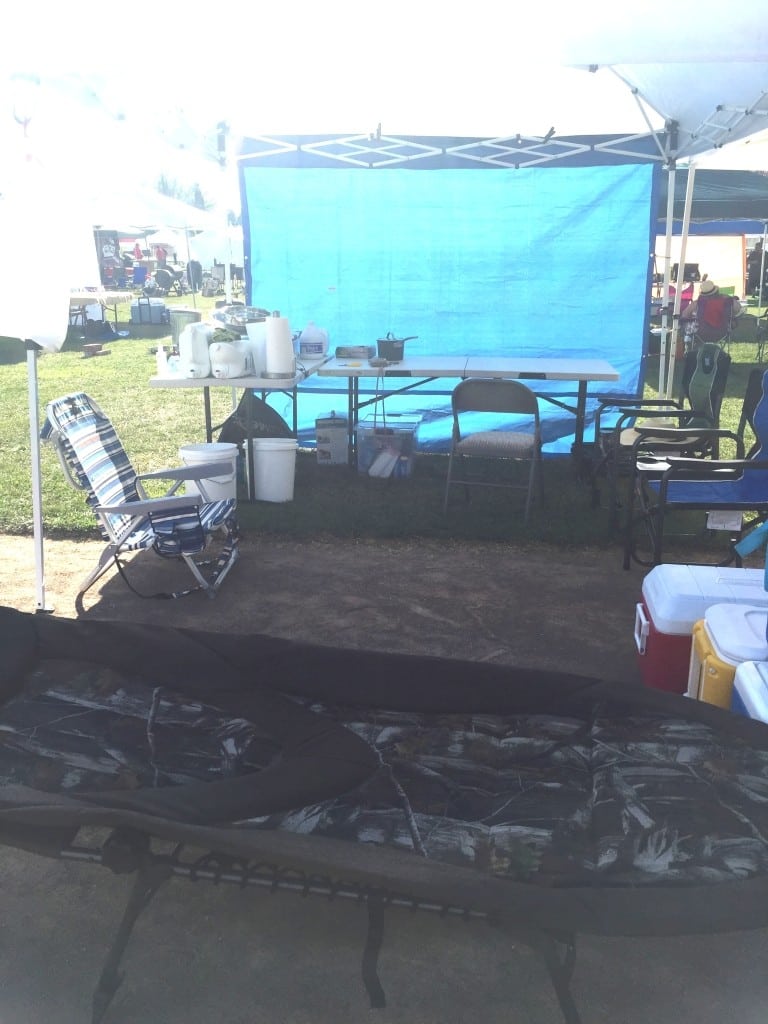 More on the setup

We found this trick on Pinterest earlier in the year, so we started saving our Laundry detergent containers. Filled one with soapy water and one with plain water for washing hands and dishes. Loved it. Great for camping too. 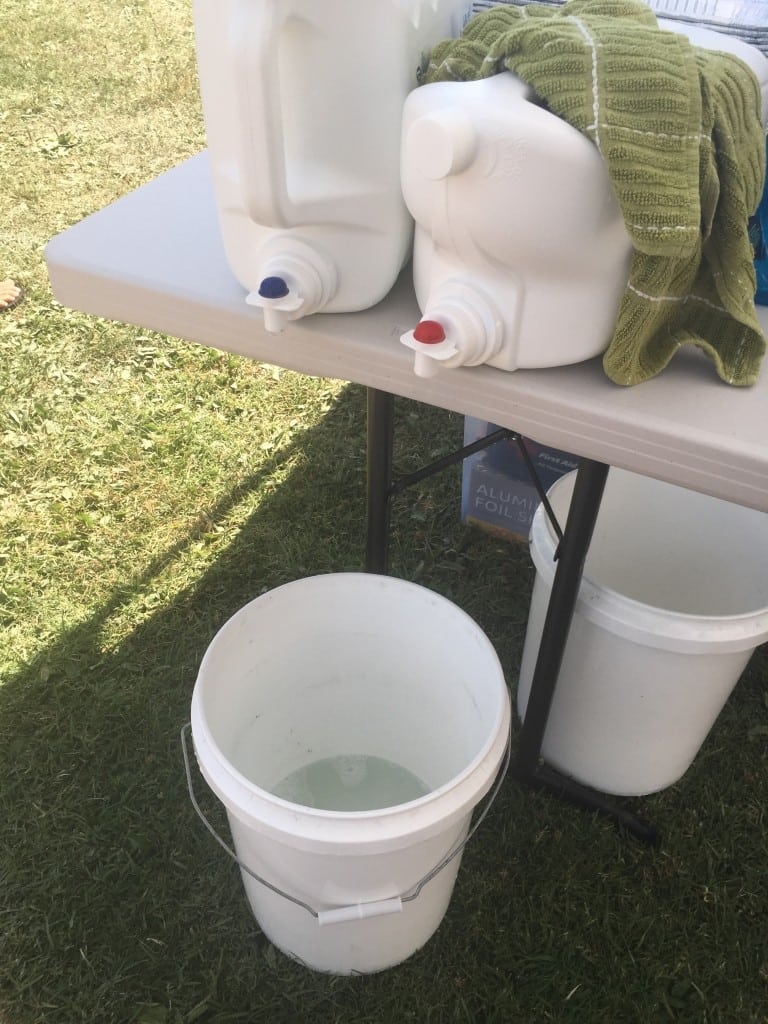 Next it was all about patience (which I have very little of). We spent a little time preparing the parsley for the turn in box, and getting the butter with herbs started, but we got a little bored. So we walked around the event to see what was there. They had a lot of vendors this year, similar to what you’d find at an arts and wine festival. We bought some corn nuts and beef jerky on our little excursion. Luckily there was live music planned throughout the day. 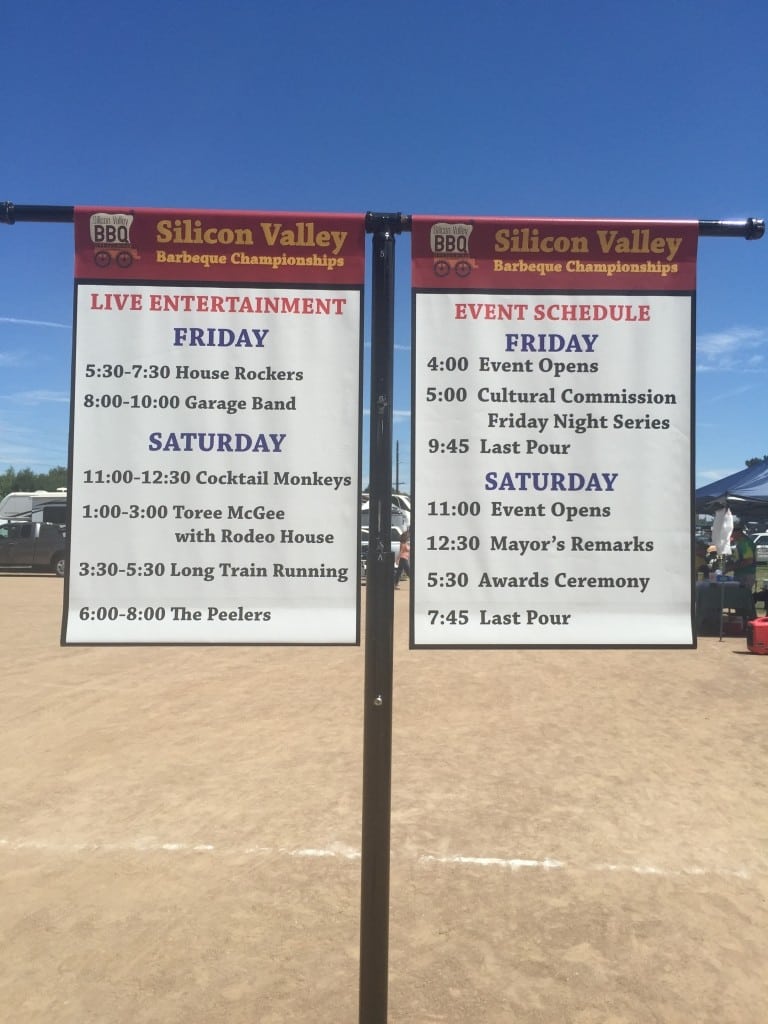 But wait, when we got back, I had forgotten that I put the butter/herbs on the stove to melt. Yikes! It had started to boil over, but our tent neighbors were nice enough to turn it off for us. That is one of the best things about this competition. The competitors are super friendly, fun, and nice.

Throughout the day we were trading stories, cooking tips, ideas, food, jello shots… Herbs BBQ and Pit Bull BBQ were back and we spent lots of time chatting with them and some of our new BBQ friends at KJ’s Big Boy BBQ. Herbs BBQ won 1st in the Tri-tip last year and Pit Bull BBQ won 1st in the Chicken and Grand Champion last year. Here’s a picture with Herb showing me his Garbage can smoker that he made which won him 1st place in the tri-tip last year. 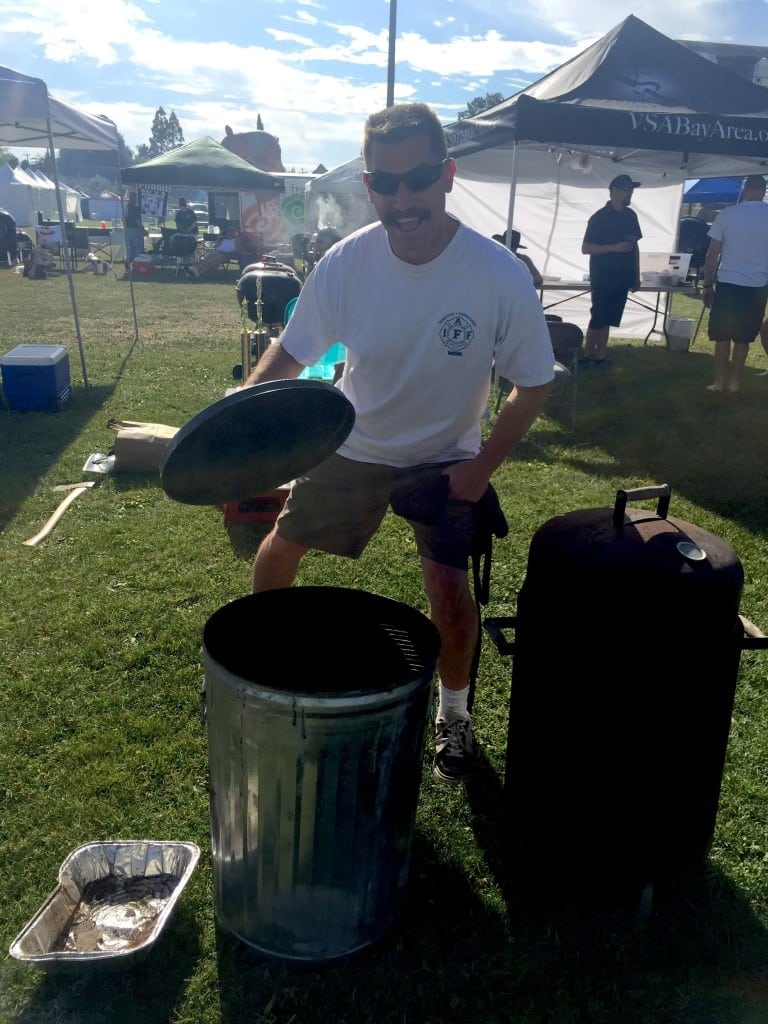 Herb showing us his Trashcan BBQ

At the competitors meeting, we found out that the timeline and order of turn-in boxes was changed. It was originally 2:00 turn in for tri-tip and 2:30 turn in for chicken. That changed to 2:15 turn in for Chicken and 2:45 turn in for tri-tip. I had to re-calculate my times to try to figure out when to start the BBQ and smoker, when to put on the meats, etc. That was a bit tough, I had hoped I got my calculations right.

Then it was more waiting so we grilled up some turkey burgers (and dare I say it… prepared a salad) so we could be ready to cook for realsies.

As the morning continued, some friends stopped by to hang out with us. 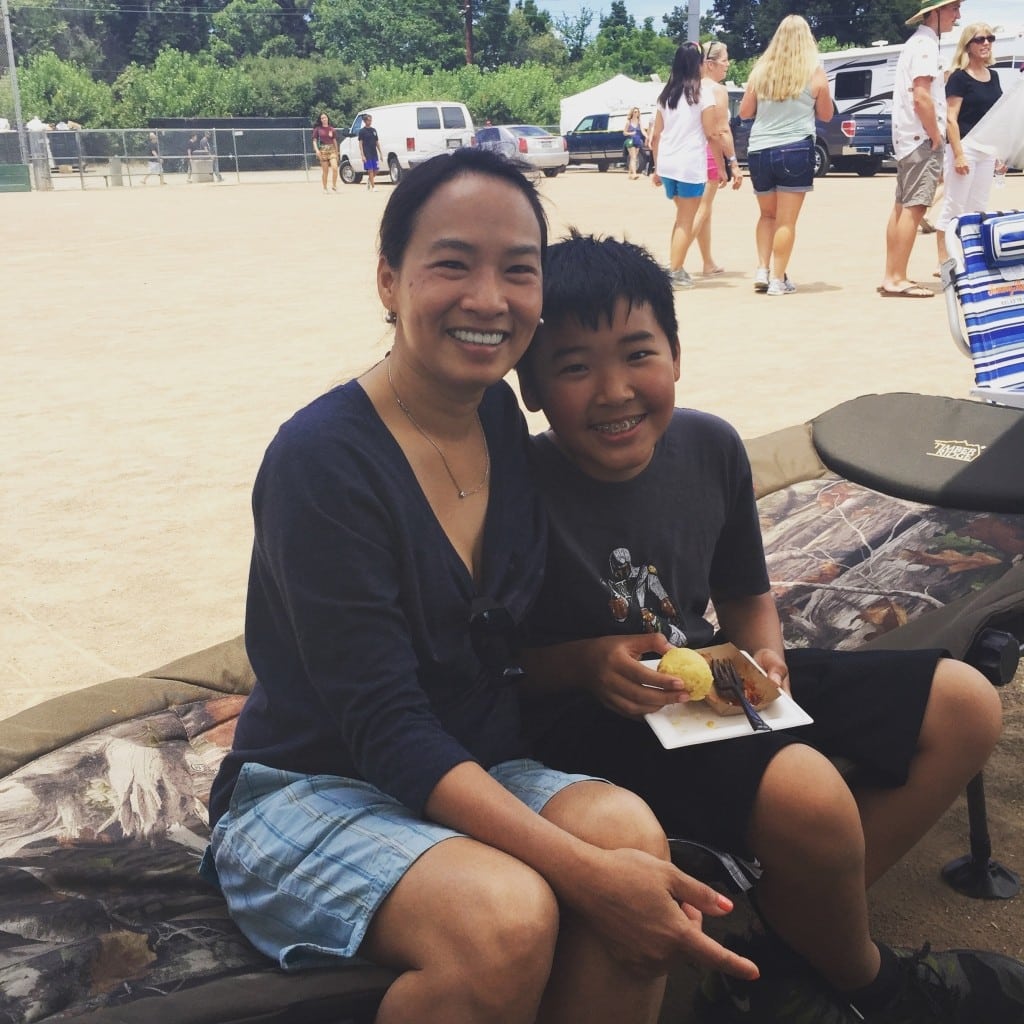 Then it was time to get our BBQ on! I was getting anxious watching all the competitors get their food on the grill/etc. We were ready! 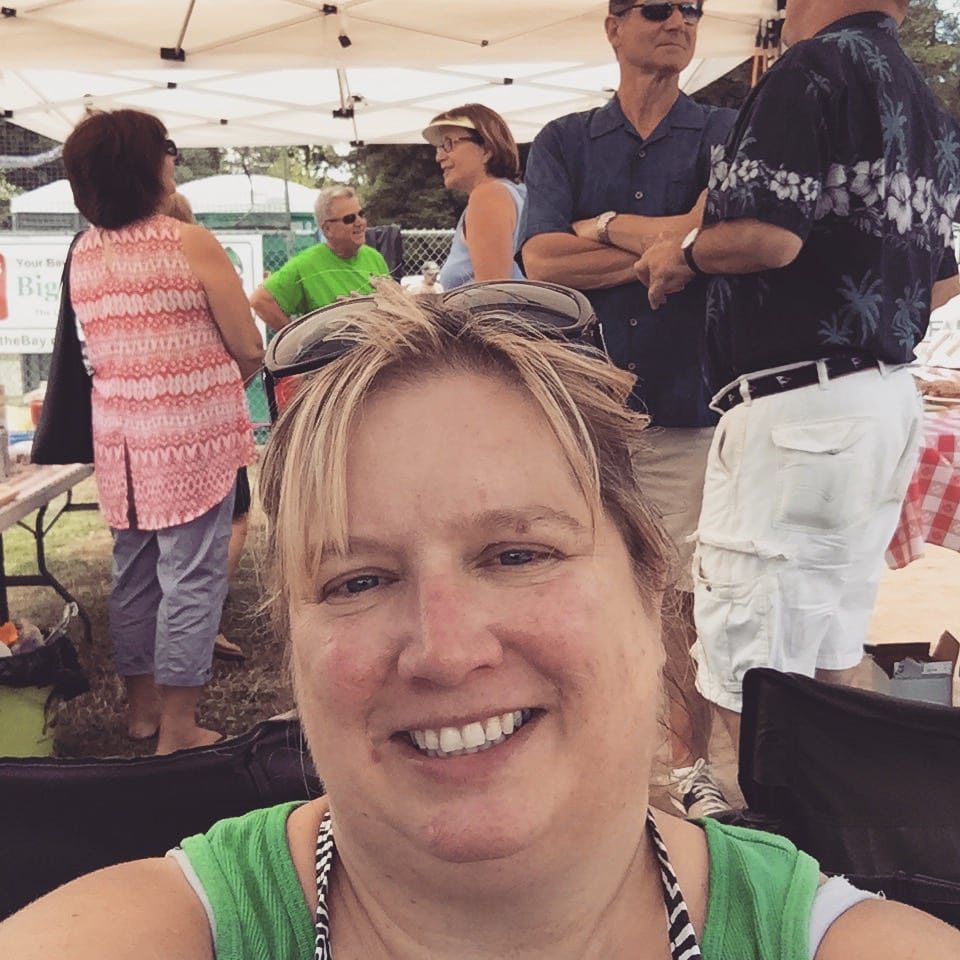 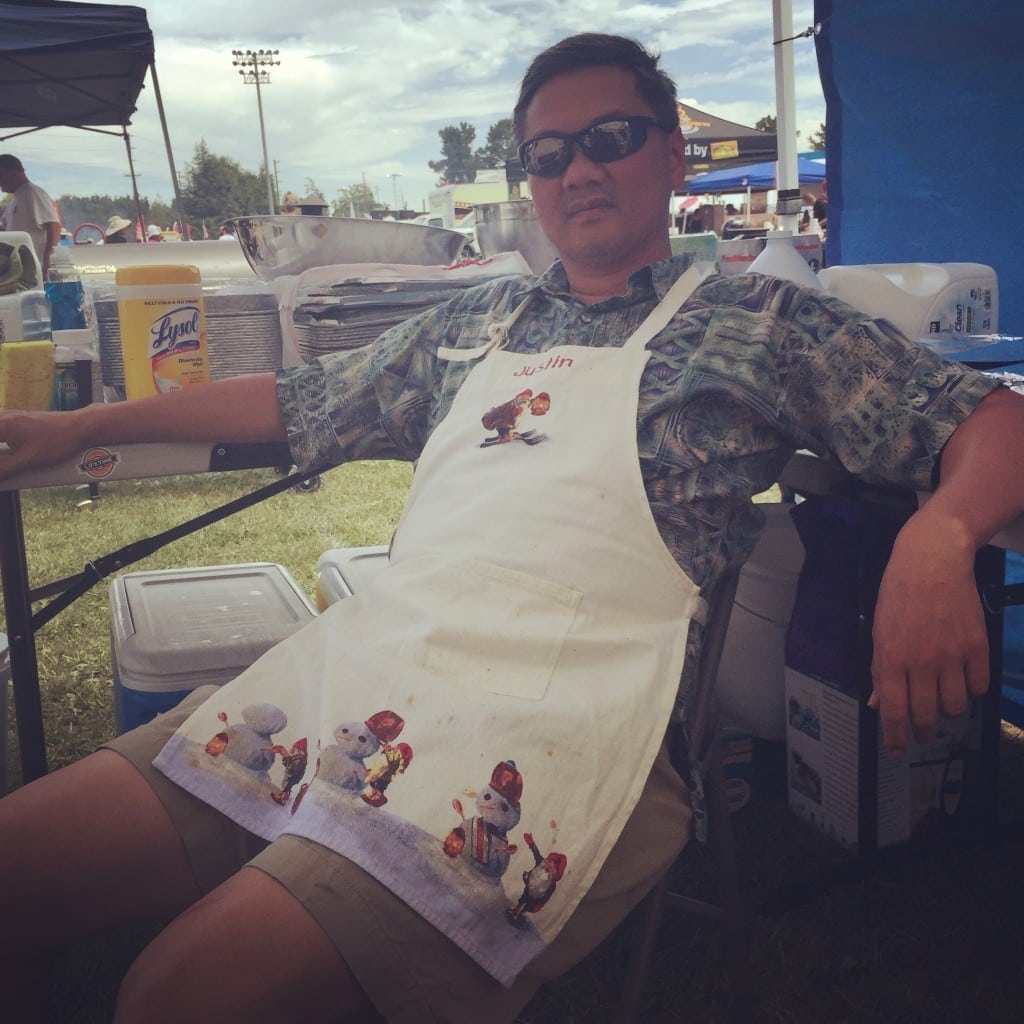 So, we started up the smoker and put the chicken on. And yes, that is bacon wrapped around the chicken! 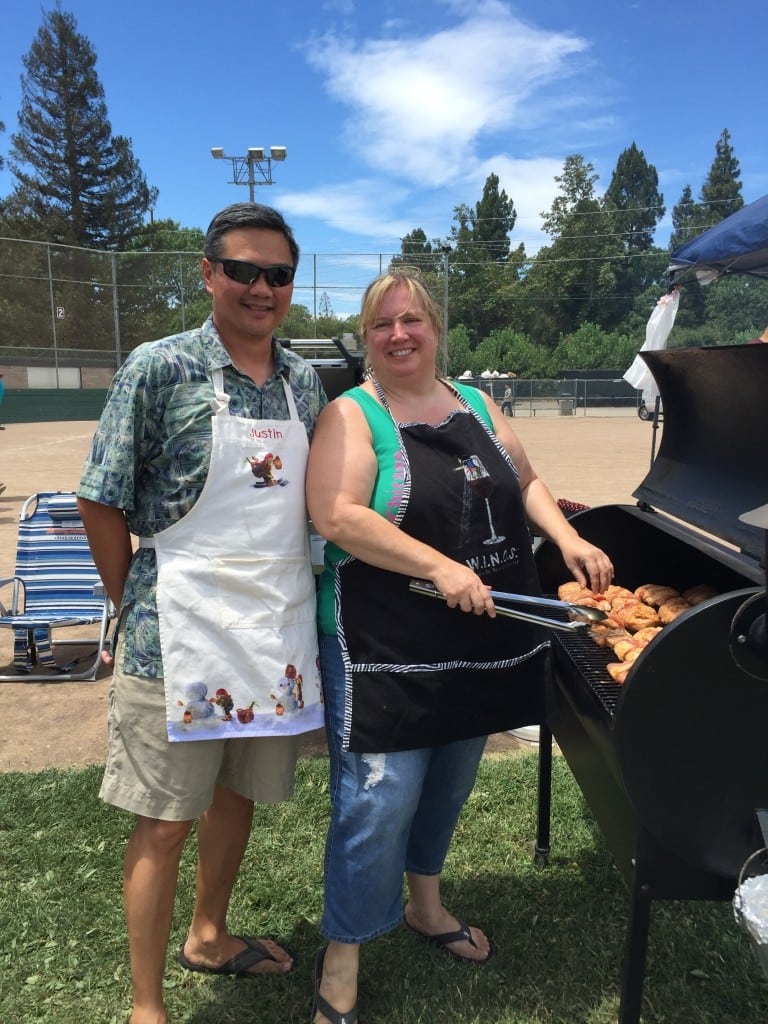 Chicken on the grill 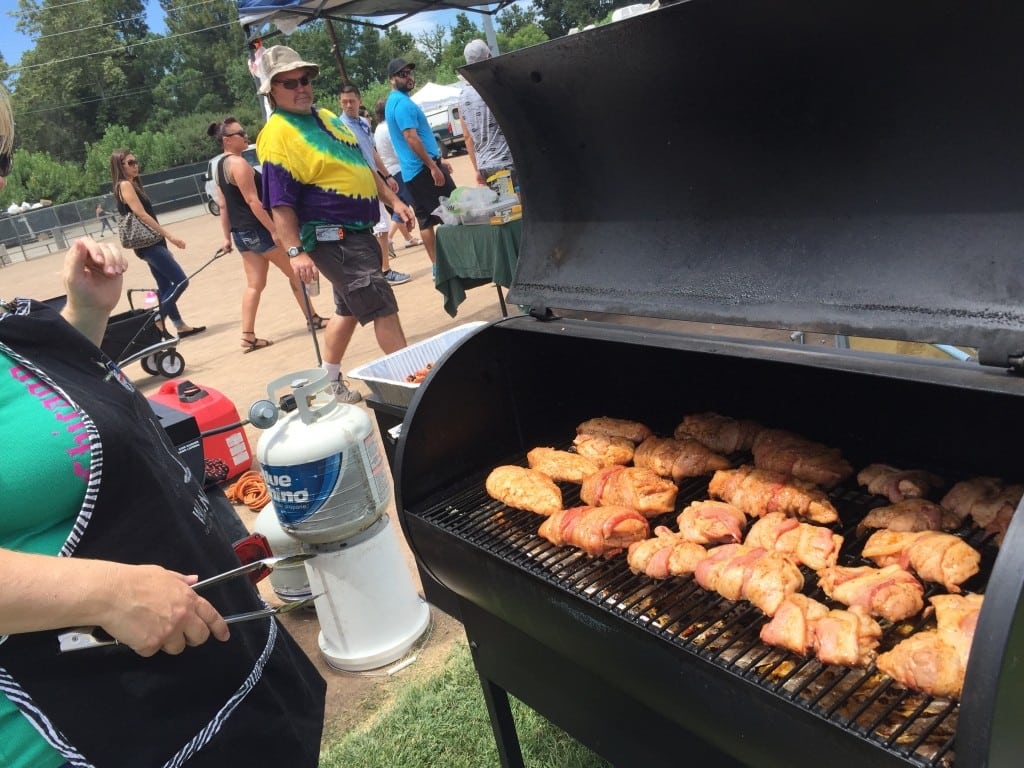 Then we seasoned the tri tip… 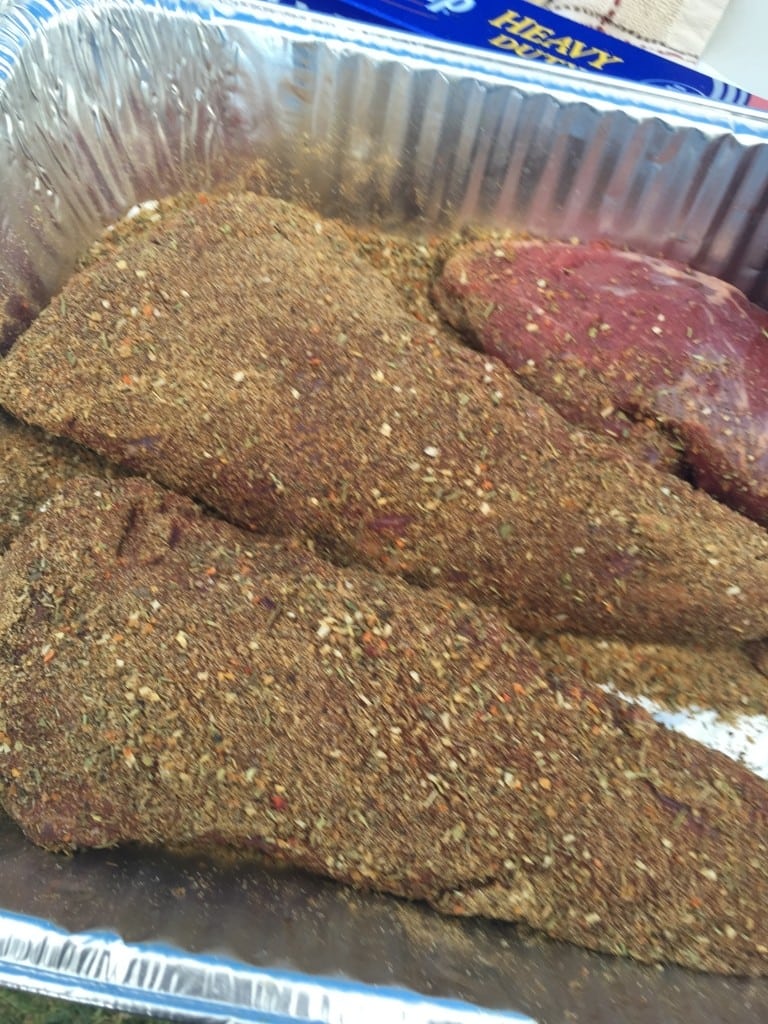 And started to prep the turn-in boxes… 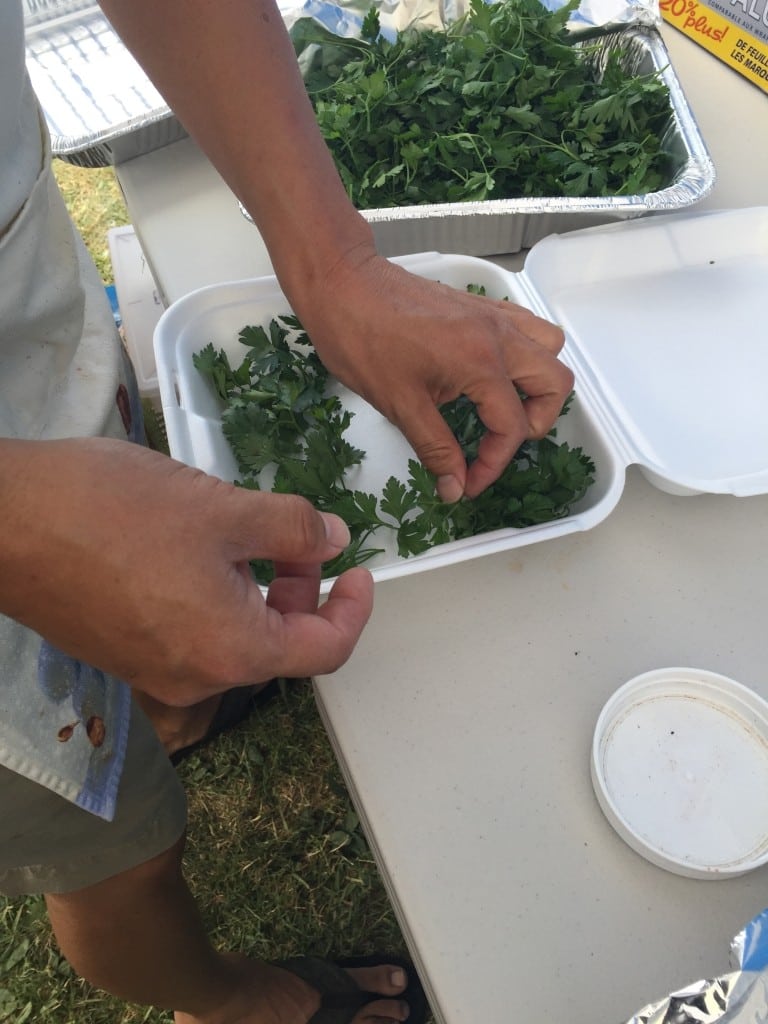 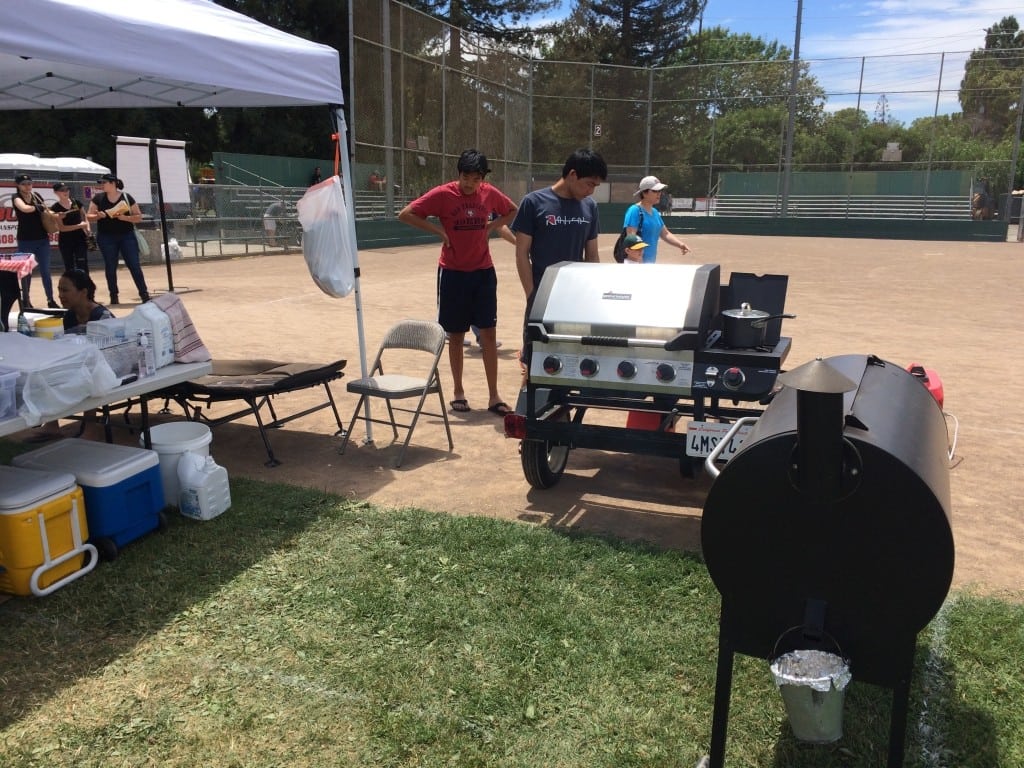 And woo hoo! Chicken is done (well I think the thighs were a little over cooked, oh well). We prepped the turn in box for chicken. 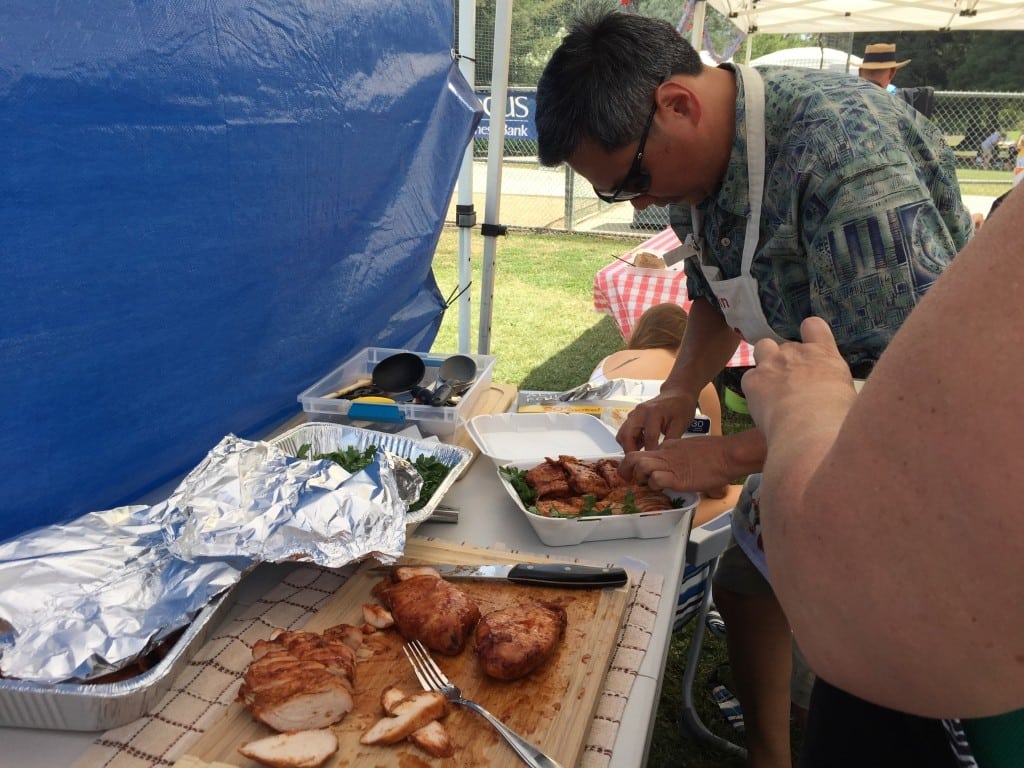 Prepping the turn-in box for chicken 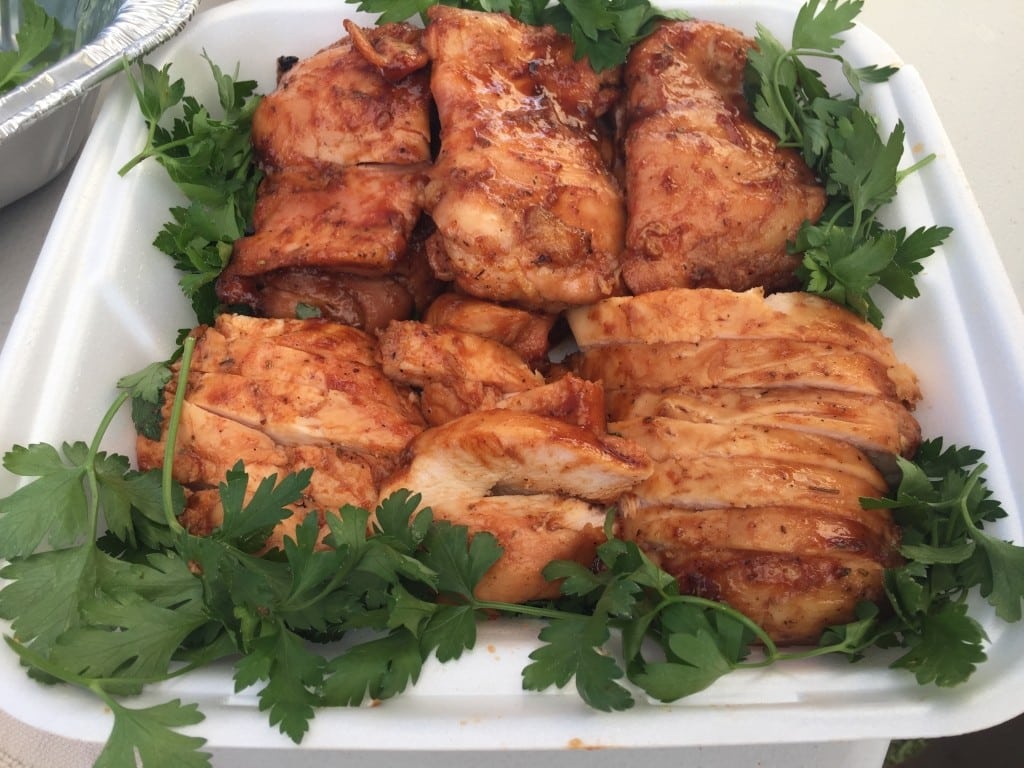 Uh oh, my timing was off on the tri-tip too. It’s a bit too done. Yikes! I even tried to stagger them, but didn’t do a good job. Oh well, turning it in as is. 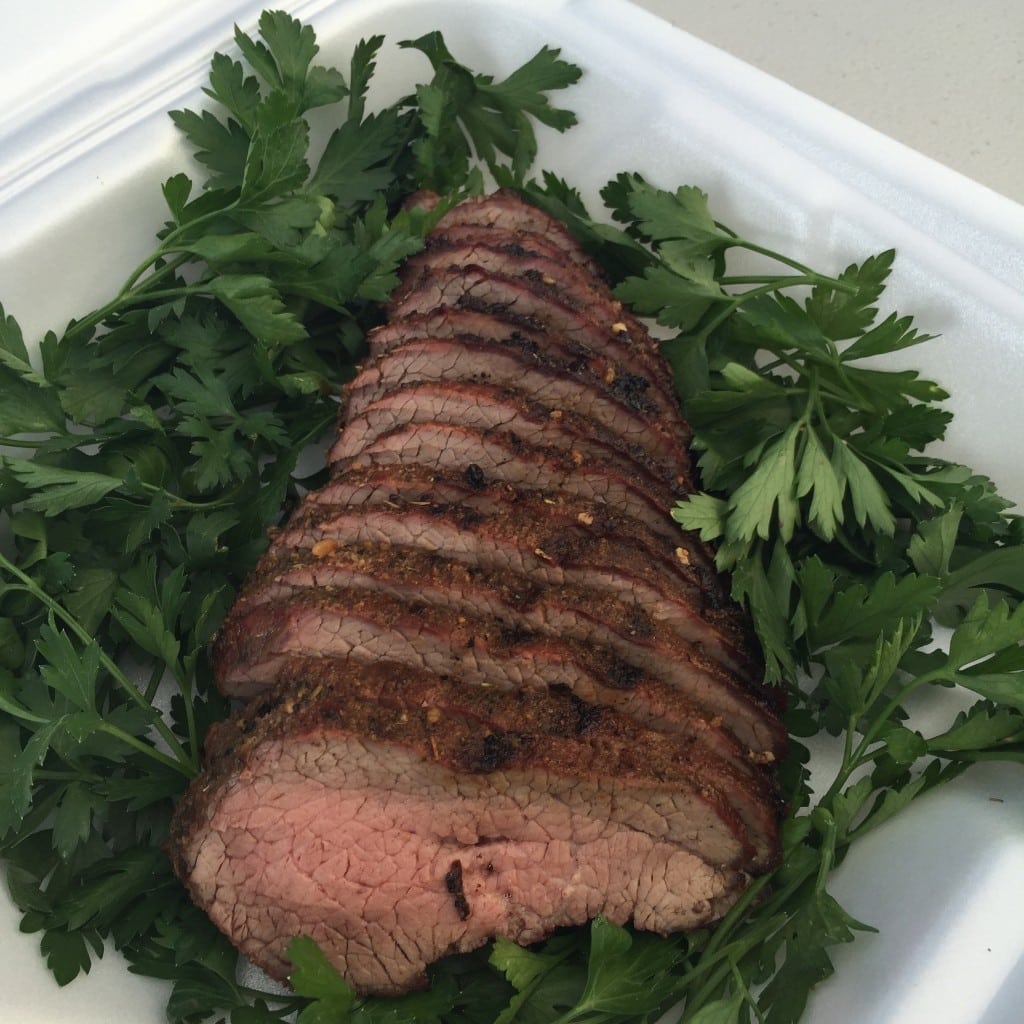 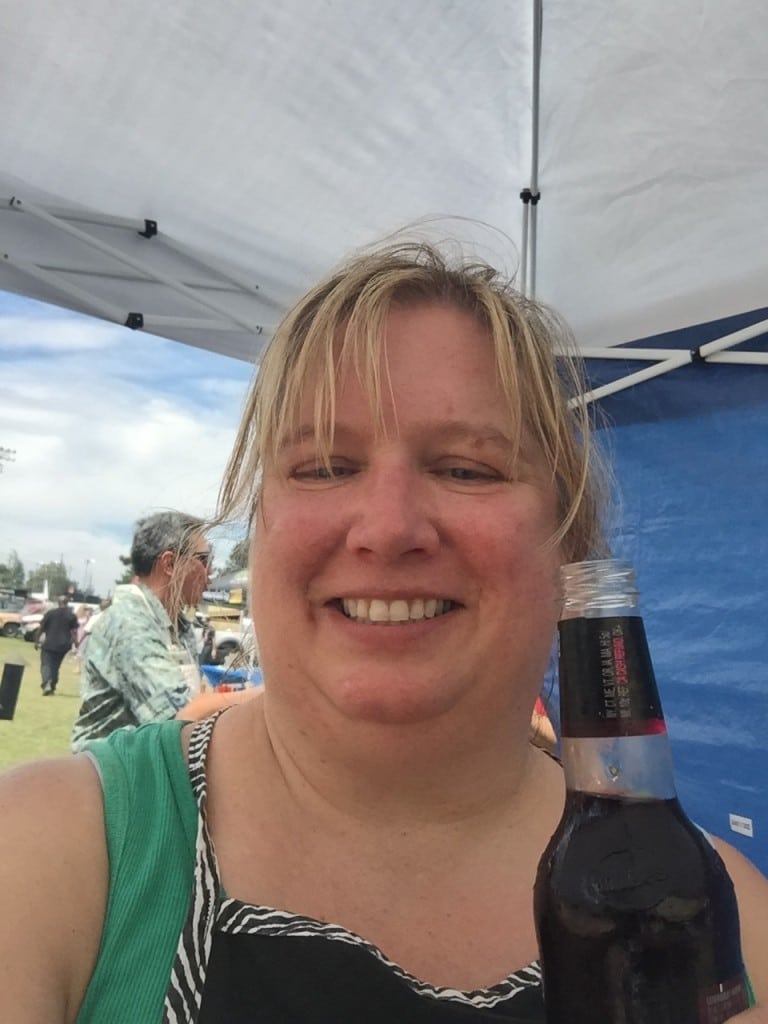 We then have a long long wait until the results are announced. And then it’s awards time!

We listened to the pro competition first for places with 4 categories (pulled pork, brisket, chicken and ribs). Then for the Backyard results. I didn’t win anything! Neither did Herbs BBQ or Pit Bull BBQ! Say what? They didn’t win? Herbs BBQ had a great tri-tip that I thought should have placed. But, our neighbor next to us, KJ’s Big Boy BBQ, won 3rd in the chicken and took overall grand champion for the event. Congratulations KJ’s!

Now it’s over and time to pack it up! Here’s my husband working hard! 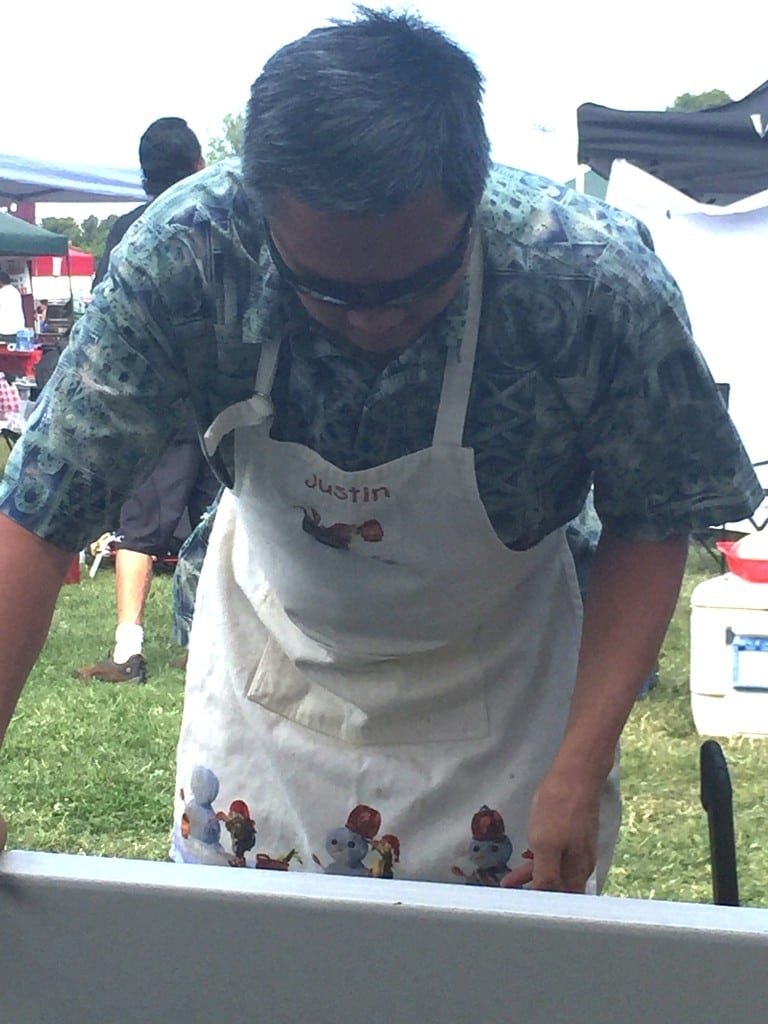 After a ton of trips to the car (otherwise we’d have to wait until 9p to bring our car onto the field), we were packed up and home 5 minutes later. Did I tell you we are only 1 mile away from the competition site? Time to unpack and we are done! 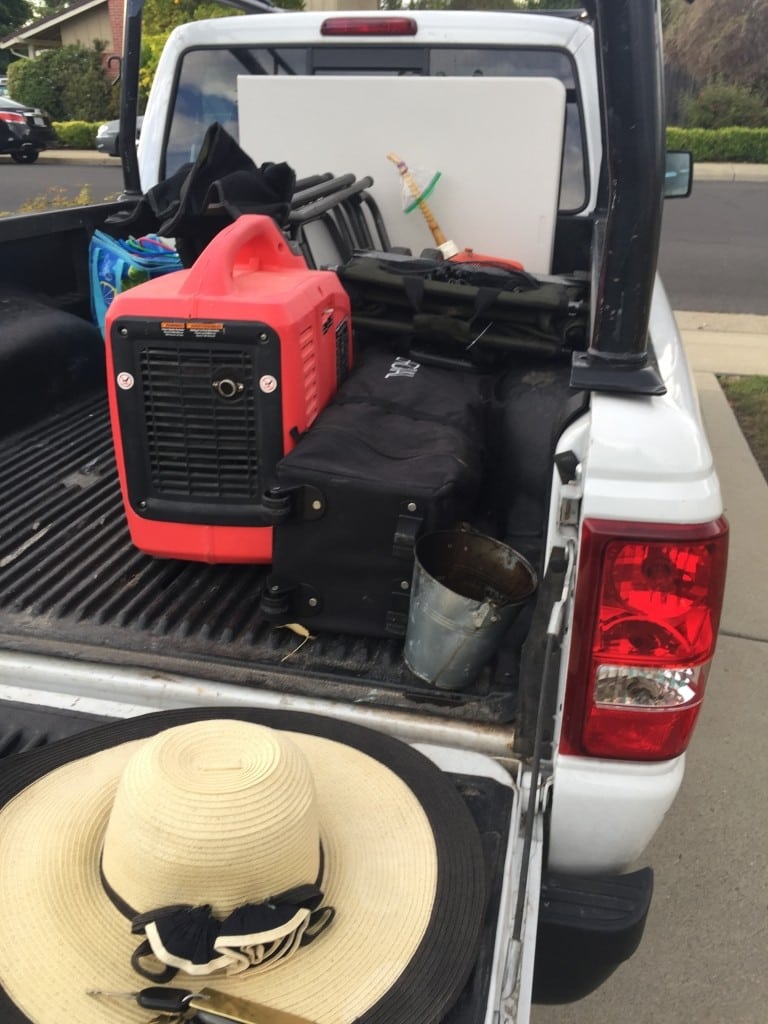 The results for me weren’t good. I expected to get low points on the tri-tip. I didn’t expect as low of points for the chicken. I shouldn’t have put that much meat in the box and should have just stuck to the chicken breast which was tender and juicy. I’m not sure why I felt the need to put in the thighs which were not as tender. Lesson learned!

Was I disappointed? Sure. But the reality is, I don’t really care. I loved doing this and taking the time to create my chicken recipe over the last year.

So, what am I going to do next year? I’m going to source my chicken from the same place between my practice run and competition. I went to Costco for the competition and the chicken pieces were a lot smaller. I am going to put the tri-tip on much later. I am going to only do chicken breast. That is my goal! 🙂

Anyways, I hope you enjoyed my recap of this years competition. One year until the next competition… look out KCBS!

Time to get my BBQ on!

2 Replies to "Silicon Valley BBQ (KCBS) Competition Recap... no winners circle for me"